The Berkeley Unified School District welcomed Doritos executives Dan Luciano and Matt Follis for the presentation of a $250,000 check being donated to the BUSD by Doritos on behalf of Berkeley High School alumni Andy Samberg, Akiva “Kiv” Schaffer and Jorma Taccone, collectively known as The Lonely Island, and well known for their work on Saturday Night Live. Two of The Lonely Island mothers, Suellen Ehnebuske (Jorma’s mom) and Margie Samberg (Andy’s mom), as well as Akiva’s brother Micah and his godmother, Susan Stone were on hand to represent the guys. 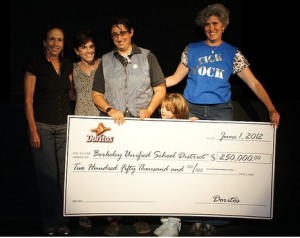 Superintendent Bill Huyett opened the event, and received the “big check” from Doritos on behalf of the District, thanking Doritos for their generosity. He also thanked Andy, Akiva and Jorma for giving back to the theaters at Berkeley High, and Willard Middle School where they first met, and are reported to have begun developing their craft.  Some of the money is being used to hire a Teacher of Stage Directing for Berkeley High School and for improvements to Willard’s Metal Shop Theater.

The event took place on Friday, June 1st, 2012 at the entrance to Berkeley High School, on the corner of Milvia Street and Allston Way. The presentation was combined with a ceremony where Berkeley High students displayed art work, as a part of the “Streets Alive” project to decorate utility boxes in the downtown area.

The student art, titled “Looking Back to See Our Way Forward” features 12 portraits of notable BHS alumni from Thornton Wilder, Bobby Seal and Billy Martin to Phil Lesh and The Lonely Island.

The presentation of the check was repeated at 7 p.m. in Berkeley High’s Little Theater, before a packed house at the BHS Choreographers “Tick Tock” Dance Production. For this event Margie Samberg and Suellen Ehnebuske presented the check on behalf of Doritos and The Lonely Island, and BHS Arts and Humanities Academy (AHA) teachers Linda Carr and Miriam Stahl, received it on behalf of Board President John Selawsky who was unavoidably detained.

BUSD Public Information Officer Mark Coplan introduced the mothers, pointing out to some John Muir Elementary School alumni in the crowd.  Now BHS students, they likely remember Mrs. Samberg who is retiring later this month, after serving students at John Muir for most of her adult life in the Deaf & Hard of Hearing program.