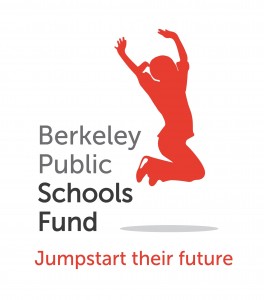 At its 30th Anniversary Luncheon on May 10, the Berkeley Public Schools Fund (formerly Berkeley Public Education Foundation) honored Berkeley High staff and raised a record $205,000. The organization’s name change was unveiled to the sold out crowd that had gathered to celebrate the School Fund’s thirty years of support for schools and teachers by honoring Berkeley High staff members Janet Huseby, Belinda McDaniel, Teri Goodman and Distinguished Teacher Tamara Friedman. The Schools Fund also gave a Special Recognition Award for Educational Success to Stefon Dent, Class of 2003.

At the luncheon, Erin Rhoades, was welcomed as the new Executive Director of Berkeley Public Schools Fund. “I am thrilled to join BPEF, an organization that has done so much for so many.  Celebrating its 30th anniversary is an exciting opportunity to raise the visibility of the foundation and celebrate BPEF as the bridge to excellence for the Berkeley public schools,” said Rhoades about her hire in April, 2013.

To find out more about the Berkeley Public Schools Fund, or sign up for its email list, go to www.berkeleypublicschoolsfund.org.