Marian Altman, a beloved former BUSD educator, after whom the John Muir Elementary School library is named, passed away recently, at the age of 84. She taught for many years at John Muir and served as principal for several years there and at Jefferson. She also was a key leader at the Berkeley Public Schools Fund, serving more than 20 years as an active Board member or Emeritus Advisor. 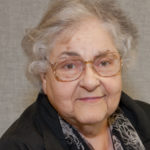 A memorial gathering is planned for Sunday, June 3, 2-4 p.m., at the John Muir Auditorium. (Ms. Altman passed away on April 23, and a small graveside ceremony was held for her on April 25 at Oakmont Memorial Park in Lafayette.)

A native of Brooklyn who moved to Berkeley 58 years ago, Ms. Altman was deeply connected to John Muir – as a teacher, administrator, activist, parent and grandparent. She arrived as a substitute teacher when her oldest child was a toddler and later taught 6th grade and then kindergarten for several years. When the district wanted to tear down the 1916 historic school building in 1975, Ms. Altman joined parents from the neighborhood who fought to save it. She served on the building committee, ensuring the design was appealing and functional. When the school reopened in 1980, the beautiful library was named for her, “The Marian Altman Library,” as a tribute to her dedication. Later, she was a principal at Hillside School and Jefferson School, but returned to John Muir when her help was needed.

“Marian’s leadership was invaluable to every school community,” said BUSD parent, grandparent and volunteer Sheila Schwartzburg. “Her knowledge of children, wisdom and sense of humor carried us through meetings.  She was inspiring to all.”

Added District Library Coordinator Becca Todd: “Marian was a strong supporter of school libraries and the role they play in developing the love of reading as a gateway to knowledge and engagement. I loved talking with her about everything going on in our school libraries.”

She will be honored also on June 1 at John Muir when the school’s Class of ‘67 presents a globe in her honor to the school library. The event had been planned before her death, and Ms. Altman had been looking forward to attending, said Libby McLaren, a member of the class, which had Ms. Altman for 6th grade.

“Marian touched all of our lives, and hundreds of kids before and after us,” Ms. McLaren said. “She had a knack of making us all feel listened to. She cared about us; she remembered details of our lives and families, spouses and pets. She SHOWED UP, with everyone she met. Since her death on Sunday night, I have had emails arrive from so many classmates – all of us with a story about something wonderful that Marian had done for each of us, and none of the rest of us ever knew about any of these other things she did. She made us all feel special. She encouraged us, right up to the last day of her life. We adored her, and found ourselves saying things like, ‘I hope I can be like Marian when I’m in my 80s and 90s!’ That’s just who she was.”

A poignant illustration of her compassion and impact can be seen in her short oral-history video on the website of the Berkeley Public Library’s History Room collection of remembrances of desegregation in the Berkeley public schools in the mid-1960s.

She also “championed the ‘greening’ of schools and worked towards replacing concrete with plants and gardening programs,” said her daughter LR Altman.

“Marian had a wonderful sense of humor,” said Mary Friedman, co-founder of the Berkeley Public Schools Fund. “Not only was she a treasure trove of jokes but she was naturally one of the funnier people I’ve met, often bringing humor to her own compromised circumstances. Her humor and determination to be engaged in the present made her a welcome member of any gathering.”

At Jefferson, Ms. Friedman said, “her two pet projects were the Asian culture program and her weekly assemblies.”

The Jefferson assemblies were vividly recalled by Ellen Hoffman, who was hired by Ms. Altman to play piano at the assemblies for many years: “She brought in many special guests to the weekly assemblies – musicians, actors, speakers, theater troupes, historians, politicians, sports heroes, etc.  Sometimes musicians would say to me afterwards ‘Wow, those young kids at this school paid better attention and listened more carefully than ANY other school I have been to!’ This was Marian’s influence!”

Also at Jefferson, her daughter said, she “wanted every kid to leave the school able to fish and ride a unicycle.”

“I admired and loved Marian dearly,” Ms. Hoffman added. “She was formidable. She expected EVERYone to do their best – children, teachers, parents, school custodians, etc. She had phenomenal standards.”

She received the Berkeley Public Education Foundation Award for Excellence in Education in 1993. On her retirement from BUSD in June 1995, a California State Assembly resolution by then Assemblyman Tom Bates commended her “illustrious record of accomplishments.”

After retirement, she continued to work for BUSD as a substitute administrator until 2010. She also played an important role at the Berkeley Public Schools Fund for the last two decades of her life, serving as a member of the Board of Directors from 1997 until 2011-12 and as an Emeritus Advisor after that. She participated in the Fund’s Grants Committee for 19 years, “sharing her thoughtful wisdom as we chose grants,” said Ms. Friedman, who continues to serve on the Fund’s Board.

“She had some amazing personal qualities and was dearly loved by so many people,” said the Schools Fund Executive Director, Erin Rhoades.

She is survived by her brother Ronald Kotick, daughter LR Altman, son-in-law Peter Allen and granddaughters Rafaela and Amalya.

Memorial gifts may be made to: