A milestone in the history of Berkeley school names was achieved tonight, May 23, when the School Board unanimously agreed to rename the former Le Conte Elementary School in honor of education advocate and civil rights icon Sylvia Mendez. 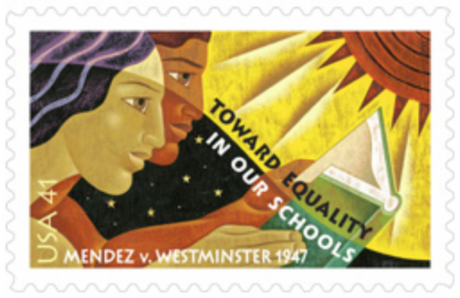 Ms. Mendez was the child at the center of the landmark 1947 case, Mendez v. Westminster, in which her parents and neighbors fought against segregated education for children of Mexican descent in southern California, a case that banned segregation in California public schools and paved the way for the national ban on segregated schools in Brown vs. Board of Education seven years later.

After retiring from a career as a pediatric nurse, Ms. Mendez devoted her life to telling the story of her family and the legacy of the case, and in 2011 she received the Presidential Medal of Freedom from President Obama for her advocacy for educational opportunity for “children of all backgrounds and all walks of life.”

The approval of the new name, Sylvia Mendez Elementary School, follows an intensive community process that was triggered a year ago by petitions from Le Conte parents and staff to choose a new name for the school.

An advisory committee appointed by Superintendent Donald Evans was formed after the School Board voted in November to remove Le Conte’s name from the school and has worked intensively over the past six months to engage the school community in the search for a new name.

In developing the recommendation, the advisory committee met numerous times and in various subcommittees and established a long and thoughtful public review process. The committee received and reviewed 118 school name suggestions and winnowed the list to 20, and then to seven top options. An outreach subcommittee created learning materials for classroom and family discussions, including bilingual posters at the school, links to further readings and resources, and topical books in the school library and classrooms.

The Committee determined that the name connects with multiple criteria that are important to the school community:

Board member Beatriz Leyva-Cutler, who made the motion to accept the committee’s recommendation, called Ms. Mendez a “living legend,” adding, “She connected to many people in the nation.”

The process won high praise from Board members for its inclusiveness and thoroughness with special appreciation expressed for the contributions of many people from the school community and the extraordinary leadership exercised by BUSD’s Director of Berkeley Schools Excellence Program (BSEP) and Community Relations, Natasha Beery, who organized and oversaw the process, and to Grace Kong, a school parent and neighbor who chaired the advisory committee.

Details about the renaming process can be found under item 13 in the online agenda packet for tonight’s Board meeting. The oral presentation by Ms. Beery and Ms. Kong and the Board discussion can be viewed on the YouTube video of the meeting beginning an hour after the meeting was called to order.

You can read about Ms. Mendez’s visit to Berkeley Unified School District in April of last year on the District website.