BUSD Music has won the NAMM Foundation’s award for Best Communities for Music Education for the last 4 years in a row! The backbone our world-class program is our local BSEP tax measure, which funds our Visual and Performing Arts district-wide to the tune of approximately $1.5 million per year. BUSD Music provides all necessary instruments and materials to students at all grade levels district-wide.

The hallmark of music education in BUSD continues to be the unique structure of universal/mandatory music for ALL students grades 3-5. Third graders receive one hour per week of general music (singing, Orff method, recorder, note-reading etc.). 4th and 5th graders choose an instrument to master over these two years in small instrument-alike groups of 15 student (av.) taught by a fully credentialed music teacher who specializes in that instrument twice a week. These instruments /classes include: flute, clarinet, trombone, trumpet, French horn, violin, viola, cello, ukulele, guitar, world drumming, trad. percussion, and drum line.

At the middle and high school levels, students can take a range of courses including leveled bands and orchestras, jazz bands, choruses, guitar method, and there is even currently a Mariachi class at Longfellow middle school! Our middle and high school groups perform at world-renowned venues such as Yoshi’s and Freight & Salvage. Our Berkeley High jazz band as well as our orchestra and band programs are award-winning groups recognized at the state and national level.

BUSD Music also enjoys an extensive partnership with the Berkeley Symphony Orchestra through their Music in the Schools Program. 5th graders and 8th graders have the opportunity to spend a weekend at our Cazadero Jumpstart Camp. Our BHS groups travel to festivals and competitions and our BHS Jazz band even travels to Cuba biannually! 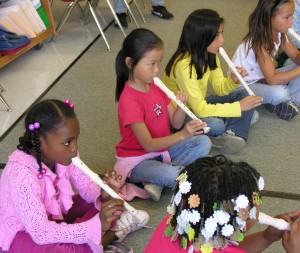 Third Grade: All BUSD third grade students attend weekly music classes. The curriculum is based on Orff-Schulwerk methodology which includes singing, movement, rhythm, solfege, note reading, recorders and pitched percussion instruments. At the end of the school year, band and orchestra instruments are demonstrated in preparation for beginning instrumental music in fourth grade. Recorders are $5.00.

Fourth and Fifth Grades: After an extended period of sampling among violins, violas, ﬂutes, clarinets, trumpets, trombones, percussion, ukulele, guitar and chorus, fourth graders choose chorus or the instrument they wish to study. Fifth graders continue with chorus or the instrument studied in fourth grade. Classes are held twice a week during the school day. Both grades perform at school concerts. Fifth graders have the opportunity of participating in the Performing Arts Showcase in March and attending the Jumpstart Retreat for fifth graders at Cazadero Performing Arts Camp in May. 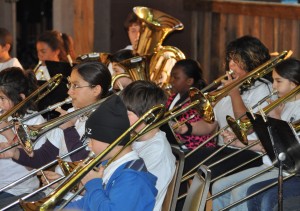 Seventh and Eighth Grades: 7-8 Bands, 6-8 Orchestra, Chorus at King, and Modern Music at Longfellow meet zero period offering students moderately challenging compositions and ensemble skill development. After school music classes including Jazz Band and Modern Music at King, Jazz Band at Willard and Jazz Band at Longfellow are open to 6th-8th graders. At middle school, evening concerts are scheduled during the school year and ensembles participate in the Performing Arts Showcase in March of each year. Some bands and orchestras compete in regional music festivals. There is a Jumpstart Retreat at Cazadero Performing Arts Camp for eighth graders in October. 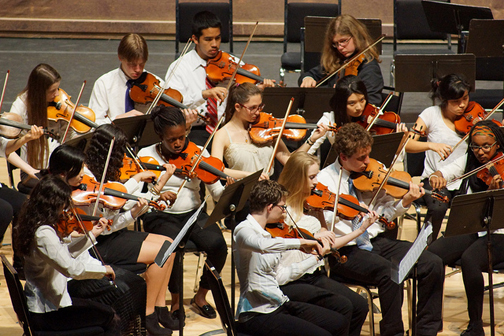 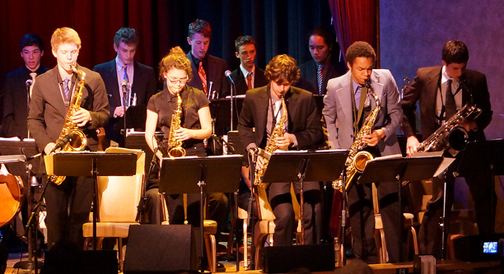 Information on the award-winning Berkeley High Jazz program can be found here. A strongly articulated music program from grades three through twelve encourages and supports students to achieve at the highest levels. In late April, 2013 150 musicians from BHS performed in four groups at the California Music Educators Association (CMEA) Band and Orchestra festival. This is the first time ever that four BHS groups have performed at a CMEA festival, and all came out winners. Chamber Strings earned highest marks from all the judges: a Unanimous Superior. Chamber Winds earned three Superiors and one Excellent. Concert Band earned three Excellents and one Superior. Concert Orchestra earned four Excellents. Bands, chorus and orchestras from the three Berkeley middle schools also participated in the 2013 CMEA Festival, with ratings given from Excellent to Superior. In the spring of 2013, just two days after winning the combo division at the Reno Jazz Festival, and a month after winning the same division at the prestigious Monterey NextGen Jazz Festival, Berkeley High’s Combo A was named as the High School Combo of the Year by Downbeat Magazine. This is the number one jazz trade magazine in the US. The BHS students outplayed groups from across the nation. This is the second year in a row that BHS’s Jazz Combo A has won both the Monterey Jazz Festival and the Downbeat Magazine Award. Click here to view a Berkeley High Jazz performance in 360°!

Music is an integral part of human experience. Used in celebrations, rituals and everyday life, it expresses the heights and depths of human feelings and emotions, the joys and the sorrow encountered by all. Significantly, the study of music combines human emotional experience and intellectual cognition. Music teachers follow the California Standards in Music when developing curriculum and assessments.

One of the greatest values of a comprehensive music program is that it allows all students to develop fully those qualities that will help them understand and enjoy life. It provides a means for creativity and self-expression. Through music they learn that their thoughts and feelings can be communicated non-verbally by composing and improvising music using higher-order thinking processes, such as those involved in skill mastery, analysis and synthesis.

Berkeley Unified school District was recently recognized by the NAMM Foundation (National Association of Music Manufacturers) as one of the Best Communities for Music Education 2014. Best Communities for Music Education honors school districts that have demonstrated exceptional efforts toward maintaining music education as part of the schools’ core curriculum. Berkeley is one of only 10 districts in California named among the 320 districts nation-wide to receive the distinction this year. A NAMM-funded Cost of Music Education study found that an average district spends $187 per student per year for a comprehensive K–12 music education program. BUSD actually invests close to $330 per student per year.
Much research has been compiled linking success in school to a music education. Please refer to the following links to read about the studies and findings:

In addition to school concerts and the annual spring Performing Arts Showcase, the elementary schools participate in the Music Education Program with the Berkeley Symphony Orchestra. All K-5 students attend a Meet the Symphony concert in November, BSO musicians visit classrooms with their instruments and in February students from six schools play with the BSO at the I Am a Performer Concert. Parents are welcome to attend.

Donations to enhance our program are always welcome. Checks, cash, credit cards may be used to donate to the Music Fund c/o the Berkeley Public Education Foundation, 1835 Allston Way, Berkeley CA 94703. 510-644-6244. If you have an instrument in playable shape you would like to donate to the program, contact the Music Ofﬁce at 644-8831. You will receive a letter from the BUSD Board for your income tax files.